10 year old Lois Marsh of Colchester has been sent a letter of achievement by her MP for her performance as a Brazilian Jiu Jitsu (BJJ) athlete.

Colchester MP Will Quince wrote to the youngster after reading about her success at the BJJ Junior European Championship, in which Lois won a gold and a silver medal. In the letter, he congratulates her on her success and says it is encouraging that a martial arts fighter can win a competition at such a high level, at such a young age.

Lois has been training for two years, three to four times a week under the watchful eye of her coaches Shane Ruffell and Alain Pozo at 9th Legion in Colchester, which is part of the Carlson Gracie team.

In the past year she has picked up a number of national and international titles. As well as winning the European Championships (which were held in Wolverhampton in November 2016), she has won the English Open championships twice and a host of other tournaments

Although relatively new to the UK, Brazilian Jiu Jitsu is one of the fastest growing sports with over 20,000 people (adults and juniors) regularly training in gyms across the country. It is a combat sport that focuses on grappling on the ground. The governing body is the UKBJJA which aims to get more youngsters through regular kids’ competitions and a national ranking system.

Her dad, Robert, has been amazed by her progress: “when she started she was extremely introverted and the change in her is amazing and due to her passion for Jiu Jitsu. Her school friends think it's pretty cool that she's a grappler and her teachers have started showing a fair bit of interest the more she wins. I think they realise it's no fluke.”

Her competition success has taken an incredible amount of hard work and dedication, juggling school work (she is a Year 6 pupil at St. John’s Primary in Colchester) and training, but she is sure it will be worth it.

Lois said “I love Jiu Jitsu and really want to make it to black belt and one day fight in the UFC. I would train every single day if I could”

Meanwhile, she just plans to defend her championship titles and add to her growing collection of medals. 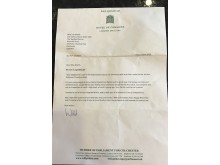 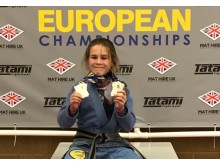 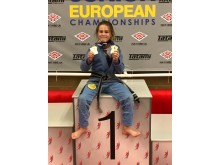 Lois Marsh, 10, of Colchester shows off the BJJ European Championship medals that led her to being congratulated by her local MP.