An Aberdeen man tells about how he lost 13 stone in weight thanks to Brazilian Jiu Jitsu (BJJ).

Levi Bunyan, 28, a freelance illustrator and designer from Aberdeen, claims he has a new lease of life after dedicating himself to the sport. As well as losing weight and becoming fitter, regular training has helped him overcome anxiety and shyness. He has even started competing regularly in tournaments.

“Three years ago, I was a very overweight 30st 25 year old. I suffered badly from anxiety and was so ashamed of how big I was, that I didn't socialise. I was overweight to the point my doctor basically said I was killing myself.

After being talked into going by a friend, Iona, I came down to Aberdeen Martial Arts Group (AMAG) for a first session. I was pretty terrified - I was body conscious, unfit and generally just shy and nervous.

I started the training and couldn't even do a simple warm up of running round the gym without absolutely knackered. Embarrassingly, I couldn't even get shorts to fit me, and at one point I even ripped a pair doing a side kick.

But I didn't give up, and I kept going back.

Three years later and I’m now 13st lighter. I’ve gone from wearing 4XL t-shirts to comfortably wearing XLs and even some Larges. I’ve lost 18 inches off my waist size. But, more importantly to me, I’m happier. I’m a lot more confident, outspoken, and generally enjoying life a lot more. I’ve found a sport I love – Brazilian Jiu Jitsu – which makes me want to get off my backside and do things, learn, and get better at it. If you want a fun way to lose weight, I thoroughly recommend looking into finding your nearest BJJ school.

My teammates and instructors at AMAG have been a huge help and motivation to keep me training. If it wasn’t for them, and friends who I have met on a Facebook weight-loss group called Fat Loss Made Easy, I don’t think would have made it.

For the future, while I still have more weight to lose, my focus has shifted. I am more focused on becoming a better Jiu Jitsu practitioner. This coupled with eating right, while still enjoying myself, will help the weight loss and give me a better lifestyle.

Training BJJ and the confidence it has given me has made me also want to compete more. My first competition I was 150kg, very shy and nervous, but 12 competitions later I am a lot lighter, and thoroughly enjoy this part of training. It has given me a focus and goal and I am looking to compete more within the next year, such as the British Championships and European Championships.”

Peter had this to say about his student: “When he first arrived he couldn't get a gi to fit him or a belt to go round his waist, but in my academy we cater for all students from pro fighters to complete beginners so Levi was welcomed and encouraged by myself and all our students. Week after week you could start to see his enjoyment growing and month after month you could slowly see his shape changing. A huge milestone was a few months ago when he had lost the full weight of me - 80kg! Now he has started doing tournaments and having some success through the hard training and encouragement AMAG/Carlson Gracie academy gives him. All in all he’s a great inspiration to fellow people who are struggling with not only weight but with other issues that life throws at you. It proves that jiu jitsu is for everyone and can change lives for ever!”

Although relatively new to the UK, Brazilian Jiu Jitsu is now one of the fastest growing sports in the world with over 16,000 people regularly training in gyms across the UK. It is a martial art that focuses on grappling, and ground techniques to overcome and subdue an opponent. It is suitable for all ages, both male and female. The governing body is the UKBJJA (http://www.ukbjja.org), which offers insurance, a club directory and a national ranking system for both adult and junior athletes.

You can read more about Levi’s journey on his Facebook page - http://www.facebook.com/grapplingwithmyweight 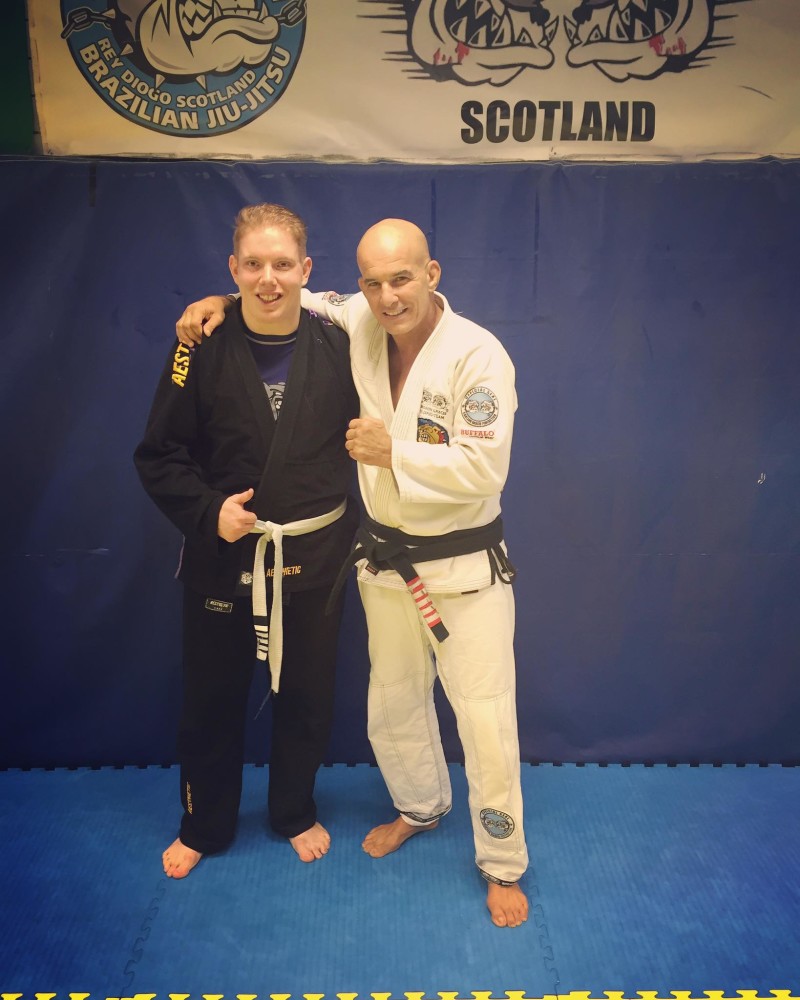