The UKBJJA is sponsoring six promising athletes to take on some of the best Brazilian Jiu Jitsu competitors in the world at the European IBJJF Jiu-Jitsu Championship in Lisbon, Portugal this January.

The six were chosen from the number one ranked British athletes in 2017 and are sure to bring home medals from what has become the largest Brazilian Jiu Jitsu tournament outside America.

The six include Yousuf Nabi, a black belt from Brighton, Elliot Beer, a brown belt from Newquay in Cornwall, purple belt Sean Cotes from Nottingham and blue belt David Cartwright-Khoza from London.

Representing the women's divisions are purple belts Kate Jackson from Cornwall and Ashley Bendle from Neath in South Wales.

The European IBJJF Jiu Jitsu Championship has grown to be the most prestigious tournament on this side of the Atlantic and attracts top competitors from Brazil, the USA and all over the world. Tough fights are guaranteed, but the UKBJJA squad are taking things in their stride.

According to Ashley Bendle: "I always want to be the best and want more from myself, and as a coach to our kids teach I want to show them that they can reach whatever they want if they try hard enough. But as far as competitions are concerned, I go out there and take in every moment. The pressure that you feel has been put on by you, so forget it and go roll."

For more information on any of these athletes, please contact newsdesk@ukbjja.org 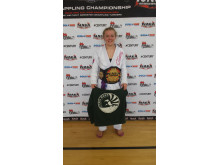 Ashley Bendle, one of six athletes sponsored by the UKBJJA to compete at the IBJJF European Brazilian Jiu Jitsu Championships in Lisbon, ...