Bristol, UK. Brazilian Jiu Jitsu (BJJ) students from all over the country will gather together on the 15th April to grapple and spar with each other non-stop over a 24 hour period. The Bristol GrappleThon is now in its sixth consecutive year of running. It has also become a powerful platform for raising funds that support important local charities.

BJJ purple belt Can Sönmez was inspired by the first ‘Grapplethon’ in Canada and adopted the concept into a popular annual event.

He says: “I'm proud of what we've accomplished, but I'm only a small part of it. GrappleThons are very much a community effort, using BJJ to give back in a meaningful way - most importantly, a significant financial way.”

This year’s event will be in support of Somerset & Avon Sexual Abuse Support (sarsas.org.uk), a specialist support group for people who have experienced any form of sexual violence at any point in their lives.

In addition to the challenge of trying to spar over a 24 hour period (breaks are allowed but at least one pair must be rolling on the mat at any one time), the participants are keen to raise as much money as possible. Each participant has set up their own donation page to attract sponsors.

BJJ black belt Seymour Yang, who is also known under his artist name Meerkatsu, has been a keen supporter of the Bristol Grapplethon since the beginning, he says:

“These GrappleThons are always such a fun event as you get to meet BJJ folk from all over the UK and roll in a non-pressured, no ego environment. More importantly, it raises lots of money for good local causes.”

As part of the fund raising campaign, Seymour is auctioning one of his rare art prints on Ebay - bidding currently stands at an incredible £1280 ($1500).

Other participants will use the event to challenge themselves physically. Michael Cowling for example intends to roll over the 24 hour period completely blindfolded!

Collectively, the 2017 GrappleThon team hope to raise over £3,000 for sarsas.org.uk.

“I've been training in martial arts for over twenty years and organising these annual GrappleThons is the most fulfilling thing I've ever done. I'm looking forward to the 15th April weekend, should be a lot of fun!" says Sönmez.

The Bristol 2017 Grapplethon will be held on the 15th-16th April 2017 at MyGym, Bristol, BS2 8SF. Everyone is welcome. Participants can stay for as little or as long as they wish. Those wishing to become a fundraiser will need to set up a Mydonation page and join the team group. More details here: http://www.artemisbjj.com/grapplethon2017/

Although relatively new to the UK, Brazilian Jiu Jitsu is one of the fastest growing sports with over 20,000 people (adults and juniors) regularly training in gyms across the country. It is a combat sport that focuses on grappling on the ground. The governing body is the UKBJJA which aims to get more youngsters through regular kids’ competitions and a national ranking system.

Further information:
The Bristol 2017 Grapplethon will be held on the 15th-16th April 2017 at MyGym, Bristol, BS2 8SF. Everyone is welcome. Participants can stay for as little or as long as they wish. Those wishing to become a fundraiser will need to set up a Mydonation page and join the team group. More details here: http://www.artemisbjj.com/grapplethon2017/ 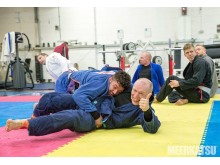 The 2017 Bristol Grapplethon takes place on 15th of April. Grapplers and BJJ practitioners from across the country will spar continuously... 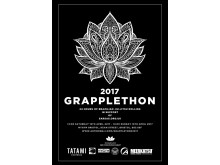 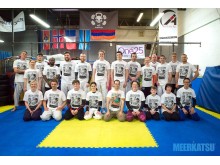